The first Regional Session of EYP Denmark was a successfull attempt to try on the Danish soil the concept of the regional session, a smaller and less ambitious event (compared to the National Selection Conference) but not less important. The session took place in Sønderborg between the 14th and the 17th of March 2018, in tight cooperation with the teachers of EUC-Syd. The head organizers of the event were Olga Sitinska (LV) and Karl B. Vederhus (IT/NO), and they worked on the project for 6 months.

The theme of the event was “Welcome to young Europe”, and it was chosen because the session was intended as a sort of “passage” to a new level of self-awareness and knowledge for the students, where all the instruments for being active citizens were given to them.

The locations where the activities of the conference took place were EUC Syd, Danhostel Sønderborg City, SDU Alsion and the common room of Damgadekollegiet.

As for the event in general, we defined these goals beforehand:

Before the start of the event, we invited EYP Germany, EYP Sweden, EYP Italy and two other schools in Denmark to send a delegation of students to the event, and we aimed at having a total of 20-25 external students. Unfortunately, the timeframe was negative for all the subjects, and we received no external delegation at the end.

As for the students from EUC Syd, the teachers decided to involve 2 classes of HTX and 1 class of pre-IB. In total, the students were 63: 36 from HTX and 27 from pre-IB. Their age range was 15-20. Also 4 teachers, the international coordinator and the principal participated in the event as observers.

The students were divided into 8 different committees, each one with a different topic. The topics, which were chosen jointly by the President of the session and the teachers of EUC Syd, were:

At the end of the event, the Jury selected 6 of the best students to represent EYP Denmark and the school abroad in the 87th International Session of EYP in Vilnius and at the 1st International Forum of EYP Luxembourg.

At the session we had 4 different teams of officials: the organizers, the chairpersons, the media team, and the jury. In total the officials were 39, coming from as much as 21 different countries. They were volunteers, without any monetary compensation (except travel reimbursements in special cases). Elina Mäkelä (FI) was appointed President of the session, and the heads of the teams were:

In total, we received 80 applications for the different official roles.

This event was a success. The cooperation between the two head organizers was good, as well as the coordination between them and the board of EYP Denmark. The concept of regional sessions proved itself to be working, especially for practicing outreach to new schools.

We achieved a cooperation for future events with the hosting school, and we managed to get an official contact person inside the institute. We also got a pool of very interested new members, some of whom could potentially become board members in the future and organize events by themselves.

The budget left from the session will be very useful for organizing trainings and keeping the new members active in the organization. Finally, we got useful experience and future know-how.

We got formal feedback from the hosting school, which collected it among the participating teachers and the students. The overall impression was very good on both the sides. The International Coordinator, Ms. Lucienne Pubellier, reported some of it to us:

A few participants mentioned that the whole event was compulsory, which created some frustrations before it started. The frustrations rapidly disappeared, making some express how grateful they were to be “forced” to attend.

“I had my doubts about the EYP and being forced to go to school on a Saturday, but my expectations were blown out of the water. It was a lot of fun, meeting new people, working together, debating. Overall it was honestly a joyful experience.” (Student from 1.HTX).

… in a funny, new and alternative way.

“I learned about Brexit and problems being there, I came to solutions to the problems we came up with, for me it would be useful because I found out that people actually would have issues because of UK leaving EU.”  (Student from 1.HTX).

“I learned a bit more about how the EU works and I’ve grown stronger in debates and in talking in front of other people. I’ve also come to understand the purpose of events such as EYP and I’ve come to learn of their existence, which is great, since I’m considering joining as a member, if not just participating in the next few events.” (Student from pre-IB).

“The whole event was executed in a perfect manner. The food was good and so were all the members of the EYP […]. It will be useful for my future life as I would a better-informed citizen. […]” (Student from pre-IB).

“I want to go to more EYP sessions” (Student from pre-IB). 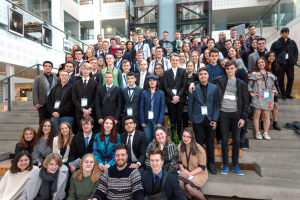